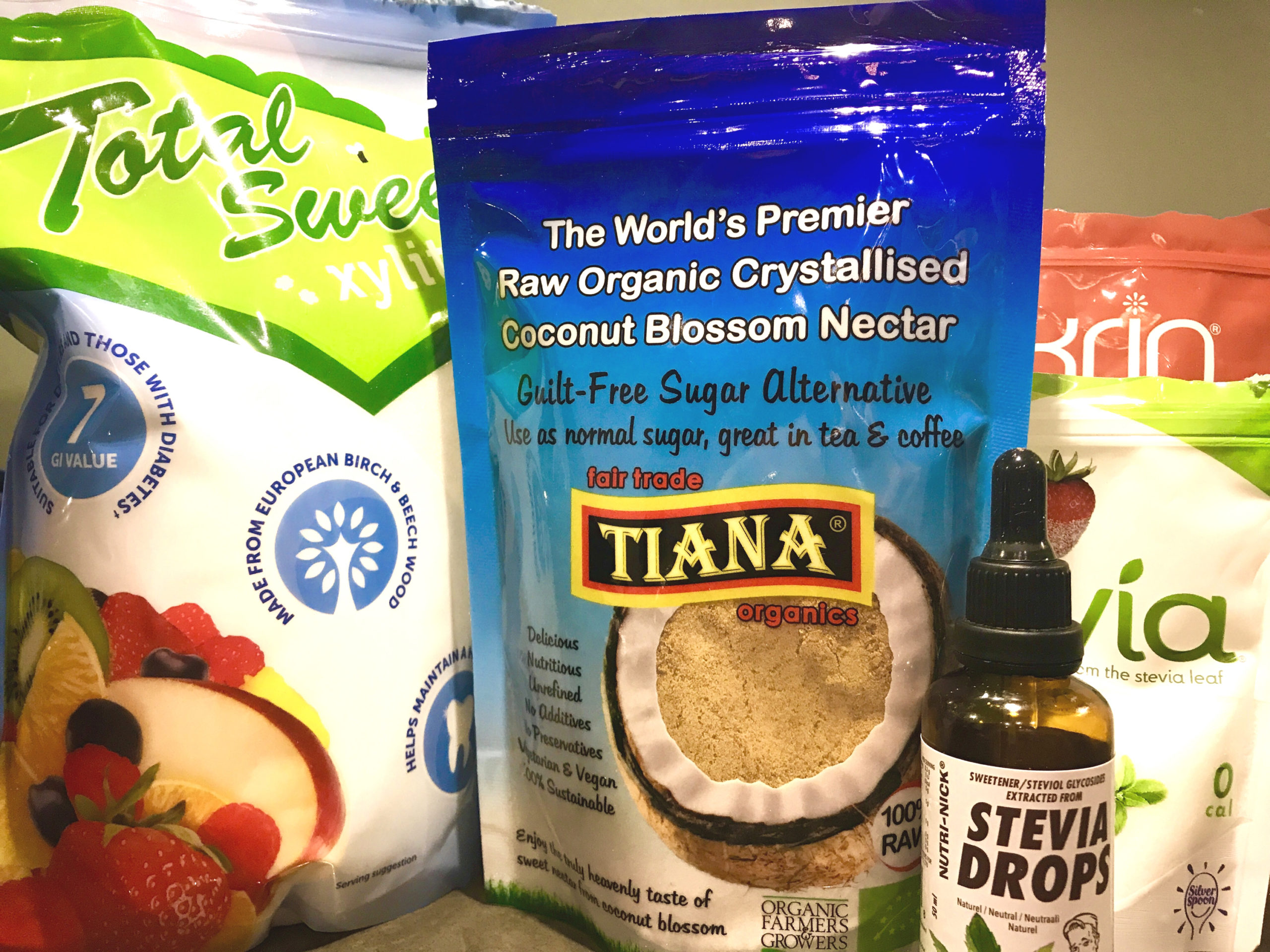 Sugar substitutes have become an important part of everyday life for many people who are concerned about the health risks associated with sugar. Extensive marketing and increased health awareness have led to their widespread use. Many of these sugar substitutes provide zero calories and are far more intense in their sweetness than sugar.

As such they provide greater food choices for people looking to cut out sugar and reduce their calories without taking away the sweet flavours that people enjoy. They are claimed to promote wellness and deemed safe for use by diabetics.

Sugar substitutes have become an important part of everyday life for many people who are concerned about the health risks associated with sugar.

Recent studies, however, are now suggesting that these earlier perceived benefits of zero calorie sweeteners might not be true. The overall use of these remains controversial as long-term prospective studies raise the concern that regular consumption of them might actually contribute to obesity, type 2 diabetes and cardiovascular disease. 1

The below sugar substitutes and sweeteners contain natural sugars. Although most are vitamin- and mineral-rich, and seem like healthier choices than sugar, many contain high levels of fructose, so their quantities should be limited. For more information on the health risks associated with too much fructose, see my blog here on sugar.

Raw unprocessed honey contains natural antioxidants, enzymes, amino acids, vitamins and minerals. These essential nutrients provide anti-oxidant support and promote the growth of healthy bacteria in the gut. However, once honey is pasteurised it loses many of its nutrients. Therefore, if it is your choice of sweetener, make sure you purchase raw organic honey. Keep in mind though that honey averages around 53% fructose, so be certain to use it in moderation.

Honey averages around 53% fructose, so be certain to use it in moderation.

Dates are high in dietary fibre and iron, and are vitamin- and mineral-rich. They are also easily digested. To use them as a sweetener, make a date paste by soaking them in hot water until they are soft, draining them, and reserving the soaking liquid in case you need it. Once drained, blend them in a liquidiser until they are smooth, and reach the consistency of peanut butter. If necessary, add some of the reserved liquid. Remember that dates are high in fructose, so use the date paste sparingly.

Although coconut sugar has a low glycaemic load, meaning it has little impact on blood sugar levels, and a rich mineral content, it has almost the same quantity of fructose as sucrose (white table sugar), so should be used sparingly.

Organic maple syrup is antioxidant- and mineral-rich; however, it contains up to 40% fructose so should be used in moderation. Choose the darker syrups as they contain more beneficial antioxidants than the lighter ones.

Bananas are rich in potassium and fibre, as well as vitamins. Overripe bananas are the best choice as sweeteners. For every cup of sugar in a recipe, use 1 cup of banana purée. Make this by adding the bananas to a food processor with 1 tablespoon of water and blending it to the consistency of a thick apple sauce. Once again, bare in mind the fructose content of bananas – this will vary depending on ripeness and the size of the fruit.

Rice malt syrup is a blend of complex carbohydrates, glucose and maltose, and is 100% fructose-free. To make this syrup, brown rice is fermented with enzymes to break down the starch. The liquid is then heated until a syrup consistency is achieved. The fermentation process helps breaks down the sugars into easily digestible ones. To replace processed white sugar in a recipe, use 1 cup of brown rice syrup for each cup of sugar called for and decrease the liquid content by 1/4 cup.

Agave syrup is very often highly processed, meaning it loses most of the beneficial nutrients contained in the agave plant. Most brands are high in fructose, ranging from 59 – 67 grams of fructose per 100 grams. If you choose to use it as a sweetener, be sure the brand you choose is free of artificial chemicals and you use it in very small quantities.

These are a type of carbohydrate called “polyols” (you can read more about this here), which are used as alternative food sweeteners to natural sugars. They contain calories and are readily converted to glucose in the liver. However they can also be converted to fat and contribute to weight gain if eaten in large enough quantities. Types of sugar alcohols are sorbitol, isomalt, mannitol and xylitol.

When it comes to sugar substitutes, the better choice of the sugar alcohols is xylitol, which does not have a great impact on blood sugar levels. In a 2011 review of its health claims, the European Food Safety Authority accepted the claim that xylitol has a lesser effect on blood glucose levels than sugar, due to its slow absorption rate. 2 This means it may help people with impaired glucose intolerance, which is a risk factor for diabetes and cardiovascular disease. 2 Its side effects are minimal and it fights tooth decay. 2

The better choice of the sugar alcohols is xylitol, which does not have a great impact on blood sugar levels.

Aspartame has been controversial since its approval for use by many European countries in the 1980s. Although a 1996 report suggested a link between it and an increase in the number of diagnosed brain tumours, later studies showed that aspartame was safe to consume, and in 2013 the European Food Safety Authority (EFSA) concluded it was safe for human consumption, including pregnant women and children. 3-4

This is largely due to the fact that aspartame is quickly broken down into its by-products, including phenylalanine, so that hardly any aspartame enters the bloodstream. However the EFSA had a word of caution. The accepted daily intake recommendations of 40mg per kg of body weight did not apply to people with phenylketonuria (PKU), a rare genetic disorder where the body cannot break down phenylalanine. 4

People with this disorder need to closely monitor their intake, particularly pregnant mothers, who are at risk of giving birth to babies with congenital heart disease and impaired neurological function if they do not do so.

Sucralose is another artificial sweetener found in a broad range of lower calorie foods. In a review of the evidence in 2000, the European Scientific Committee on Food concluded that it is safe for human consumption. Claims that it has no effect on tooth decay and has less of an impact on blood glucose than sugar were validated in 2011 by the EFSA. 5

Saccharin is calorie-free and 300 to 400 times sweeter than sugar. It is not broken down when digested, but is slowly absorbed into the system and rapidly excreted by the kidneys. Concerns that it could cause cancer have been disproved. Although there is no evidence that it can cause allergic reactions, certain health groups maintain infants, children and pregnant women should avoid it for this reason.

In spite of the fact that the above non-nutritive sweeteners are reportedly safe for human consumption, it remains my view that they should be avoided. There is no scientific evidence that the use of them leads to weight-loss. In fact, repeated studies show they cause greater weight gain than sugar. 6 Research is also demonstrating that they worsen insulin sensitivity to a greater extent than sugar, and cause many of the same adverse health consequences, such as type 2 diabetes, stroke and cardiovascular disease. 7

In my view, stevia is one of the safest non-nutritive sweeteners and sugar substitutes. 8 It is made from the stevia plant and has no calories, no carbohydrates, and does not raise insulin levels. 8 Its only downside is its slightly bitter after-taste. 8

In my view, stevia is one of the safest non-nutritive sweeteners and sugar substitutes.

In research studies, stevia has shown minimal effects on blood glucose levels, and some derived compounds have shown a therapeutic blood glucose lowering effect. 9-10 In a multi-centric study in China it was also shown to lower blood pressure. 11 The EFSA approved its safety as a sweetener in 2010 after carrying out a comprehensive analysis of all the evidence. 12

When using stevia as a substitute for sugar in baking, this can present a problem because refined sugar adds bulk to recipes. However, to make up for this lost bulk when using stevia, use 1/3  to 1/2 cup of one of the following bulking agents – yoghurt, fresh fruit purée, 2 whipped egg whites or 1-2 tablespoons of coconut flour.

Lo Han Kuo is also known as monk fruit extract, and is the other non-nutritive sweetener I recommend. It is extracted from a fruit grown in South East Asia, where it has been used as a cold and digestive aid for centuries, but is now being used to sweeten foods. Although it has not yet been rubber stamped by the EFSA, it has been granted GRAS (Generally Recognised As Safe) status in the US where no upper acceptable daily intake has been set, as it is considered very safe. 13-15

Lo Han Kuo is fast creating a stir in Europe because it is a natural zero-calorie sweetener, contains anti-oxidant and anti-inflammatory activities and does not have the bitter after taste of stevia. 15-16 It has also been shown to possess anti-diabetic activities and to work as a natural obesity treatment. 17

Extensive marketing of non-nutritive sweeteners has led to the overuse and sometimes abuse of them. They are believed to suppress hunger and appetite, leading to beneficial effects on body weight, and are consumed by both lean and obese people. However the overall use of them remains controversial. Although most have been approved by the EFSA and received GRAS approval by the FDA, a consensus has not yet been reached by scientists regarding their safety.

This means that if you want to be completely Sugar Safe®, you’re better off kicking the habit of needing something sweet and avoiding sweeteners completely. Once you eliminate sugar from your diet, your sugar cravings will disappear and you will not feel the need for sugar substitutes. This is obviously a personal choice, but something I would strongly encourage.

However, if you find the thought of eliminating sugar too daunting, and you feel the need for something sweet, I recommend the nutritive sweeteners with the caveats I have alluded to, and of the non-nutritive sweeteners, stevia and Lo Han Kuo.

Want to discuss your sugar intake with Andy? Get in touch with her today to book a consultation: andy@thesugardoctor.co.uk

CATCH YOU AT CHARLI'S

Come down, say hi and enjoy some of our delicious food. We operate a walk-in-only policy during the week, but give us a call to make a reservation for the weekend.